Home pageReporting meeting with the team

Abstracts from the report of the head of Embamunaigas JSC at the reporting meeting with the staff for the first 9 months of 2019 and the expected results of the year. 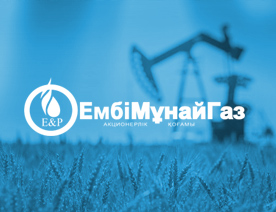 On October 24, the head office of Embamunaigas JSC (hereinafter EMG or the Company) held a reporting meeting of the Chairman of the Board A. Zhaksybekov with the workforce. The reporting meeting was attended by heads and workforce representatives of all 6 production structural divisions, trade union organizations, top management, heads of departments and services of the EMG management apparatus.

Starting the report, the head of the Company Anuar ZHAKSYBEKOV once again congratulated EMG oil workers on the 120th anniversary of Kazakhstan's oil:

- Once again I congratulate you on the 120th anniversary of Kazakhstan's oil, the development of which began with the Karashungul field. As you know, we celebrated this holiday at a high level. In Atyrau, the solemn event dedicated to the holiday was attended by President Kassym-Jomart Tokayev, who awarded 41 best workers of the oil and gas industry. Among those who received the high award from the hands of the head of state, there are Embamunaygas employees.

The veteran of the central control unit Kulyash Zhumagaliyeva was awarded Order of Kurmet, the head of the Zhayikmunaygas Department Amangeldy Suleimenov was awarded with the medal “Ерен еңбегі үшін” (For Distinguished Labor), the operator on oil production at the field Akingen Zhylyoimunaigas JSC Bolat Iztleuov was awarded a Certificate of Merit.

Oil workers, our pensioners and employees who made a great contribution to the development of the company, were awarded state awards and certificates. They were awarded a badge on behalf of the Ministry of Energy of the Republic of Kazakhstan in honor of the 120th anniversary of Kazakhstan's oil

This is a great honor for EMG oil workers, and we are glad that the work of oil workers is evaluated at the state level.

I once again congratulate you on this wonderful holiday and express my gratitude for the creative work in the production of oil, the so-called "black gold"!

I would like to emphasize that the team of Emba has historically formed the backbone of professionals in the domestic oil and gas industry, from the moment of the first oil fields on Emba to the present day. More recently, our production workers took part in the competition of professional skills on the scale of the "KazMunayGas" national company, which this year was held in Tatarstan. According to the results of the competition, our employees won prizes in 5 nominations. I would like to name them today: so, the gold medal for the excellent knowledge of theory and practical performance was brought by the operator of a brigade No. 1 of the oil and gas shop of the Karsak DossorMunaiGas oil and gas production department (NGDU) Assylbek KUSHEKENOV and electrician for repair and maintenance of electrical equipment of the Zhayik ESD of Embamunaigas department Alibek TULEPOV.

With the silver medal, we are pleased with the operator for oil and gas extraction plant for the extraction of the Kenbai oil and gas field of Kainarmunaigas NGDU Yerbolat ZHUMAGALIYEV and the operator to maintain reservoir pressure plot for reservoir pressure maintenance of oil and gas production workshop Kenbai Bereket ELEULIEV.  The honorary bronze was provided to us by the operator of the shop for the preparation and pumping of oil of the Kaynarmunaygas NGDU Arslan DZHIENALIYEV and his assistant, Azamat DZHUMASHEV.

I want to thank the employees, heads of shops, who are worthy of the title of Emba oil workers. In connection with the rules of encouragement of employees of Embamunaigas JSC, the salary of all the best specialists during the year is charged with 30 percent extra for the 1 place, 20 percent extra for 2 place, 10 percent for 3 place.  This is a great motivation for employees. Thank you!

I can not note once again not to mention the high civic responsibility of our team, which this year twice distinguished itself by assisting in the purchase of housing for 8 low-income families of 5 districts of Atyrau region and taking part in the Republican campaign calleed "Арыс. Біз біргеміз".

I would like to remind you that the voluntary assistance provided by the Company's employees was used to purchase and transfer sets of school clothes for more than 400 students from 16 schools from the low-income families of Arys, who suffered as a result of the explosions. In addition, on the eve of the school year, 70 students of city and district schools from socially vulnerable categories of Atyrau region were provided with school clothes and shoes.

The contribution of EMG people in support of the local community was recognized at the state level and our team was awarded the "Жомарт журек" (Generous mind) award in the category "Туған өлке" (Native land). This award was established in the framework of the program of the First President of the Republic of Kazakhstan Nursultan Nazarbayev - "Рухани жаңғыру" (Spiritual renewal).

I thank you for your responsibility and kind hearts. With the support of EMG oil workers, seven large families without housing became owners of their own home. In the city of Arys, support was provided to children from low-income families who were provided with school uniforms.

Dear colleagues, thank you very much. I want to wish you well-being and further development of our company!

During the main part of the report, A. Zhaksybekov once again reminded that the main objectives of EMG in the field of labor protection and the environment (hereinafter - OTiOS) are: zero accidents, no accidents and spills and minimal negative impact on the environment. Despite the achievements, the Company is constantly moving forward, introducing new approaches that are used in international companies-leaders in the field of OTiOS.

At the same time, the head of EMG noted the existing problems in this direction, in particular, omissions in the work of transport companies providing services for the transportation of employees of the Company. Luckily, these shortcomings do not lead to injuries among EMG workers.

In this regard, A. Zhaksybekov instructed the Department of transport: to strengthen the control over the speed regime, to conduct on a regular basis briefings and explanatory work among drivers, to provide in 2020 mandatory training of all drivers to drive safely in accordance with the OPITO international standard.

The Department of labor protection and environment was instructed to strengthen awareness-raising among employees of the Company, together with the departments of personnel management and remuneration to provide in 2020 additional training of personnel on labor protection and safety (hereinafter - OTiTB) and to develop a program of motivation of employees for excellent performance in the field of OTiTB.

Then, A. Zhaksybekov focused on the incidents that took place in the current year related to gas and oil occurrences at the wells of individual production departments. The head of the Company elaborated on the analysis of the causes of the incidents and gave a number of instructions to the relevant managers to prevent their recurrence, including creating a Commission and conducting an internal investigation to identify system errors and develop a comprehensive action plan aimed at preventing and eliminating the harmful effects of hazardous production factors and their consequences.

In terms of environmental protection, there was a significant decrease in emissions of pollutants into the atmosphere with the same period last year in connection with the full launch of the LO-CAT plant, in which the acid gas is not burned on the torch of the complex gas treatment plant plant (UKPG), but is used to produce commercial sulfur. In addition, the volume of transportation of commercial gas to consumers has significantly increased, thereby reducing the forced combustion of gas on the torch of the UKPG plant Zhylyoymunaygas NGDU.

The head of the Company once again reminded all managers about the priority of labor protection and industrial safety and the need to communicate to each employee information about the inadmissibility of hiding any facts of a negative nature in the workplace!

Regarding the performance of production indicators for 9 months of 2019, EMG executed the plan of oil production in more than 2 164 thousand 503 tons, with the plan - 2 million 159 thousand 888 tons, production in excess of the plan was + 4 thousand 615 tons of oils.

In the course of the report, the Chairman of the Board elaborated on the results of the activities of each production structural unit with an analysis of the shortcomings in the work and gave instructions to the relevant managers on their elimination and further development of production and social infrastructure.

The results of the key activities of the Company, including the implementation of the Concept of the EMG development for the next 10 years, adopted last year, were also considered. Currently, the status of implementation of strategic projects within the framework of the Concept is reviewed monthly at the meetings of the established Project Committee in the following areas:

Increase of resource base due to additional exploration and geological prospecting work.

gas business development due to the construction of gas pipelines, power generation systems and utilization of gas.

- In the report the head of EMG elaborated on the social aspects of the Company's activities:

- The company provides its employees with a high degree of social protection. In the framework of the collective agreement the Company fulfils obligations on social support of pensioners, carrying out the payment of financial assistance to the state holidays of Kazakhstan, to anniversaries, to buy drugs, the purchase of vouchers to sanatorium-resort treatment and etc.

Within the framework of the values on the priority of life and health of the person, the Company constantly pays great attention to the promotion of sports among the EMG oil workers, creating conditions for training on the basis of all production departments. This year, EMG e,ployees took a ticket to the final part of the Olympics, which was held in Shymkent in 3 sports: arm wrestling, chess, and volleyball. In honor of the 120th anniversary of Kazakhstan's oil the "Мунайшы Барысы" (Munai Fighting) was organized in kazaksha-kures among employees of production departments Emba. A bike ride was held at a high level with the participation of more than 150 employees of The company in the regional center.

This year, as part of the celebration of the 120th anniversary of Kazakhstan's oil,

a whole series of sports, cultural events and intellectual competitions was organized for employees of oil and gas departments. Thus, the "Brain ring" intellectual game was organized in the Zhylyoymunaigas NGDU in the Caspian sea of Samaly, dedicated to the year of Youth and "120 years of Kazakhstan oil". Creative competitions were held among oil workers working on a rotational basis on the basis of shift settlements and dormitories of oil and gas departments.

In the course of the report, data on personnel training, the state of labor and performance discipline, facts on violations of labor regulations were also provided, and instructions were given to eliminate the shortcomings, including strengthening of explanatory work among employees of the Company and contractors.

- If each of us, especially the leaders, will strictly comply with safety regulations, be responsible for his words and bring the matter entrusted to him to the end, will take care of the environment and the property of the Company, on a regular basis to improve their skills and respect their colleagues, the oil Emba will achieve even greater heights, and employees will be confident in the future! If we ignore the accepted values and allow lenient attitude to various facts of violations, further successful development is no longer worth talking about! - noted A. Zhaksybekov.

After the report, the head of the Company answered the questions of employees regarding production and social activities.