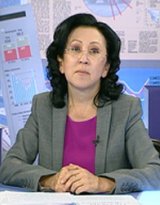 Independent director of the board of «Embamunaigas» JSC, Director of Expert Kazakhstan LLP

She began her career as a research officer at the Research Institute of Economics under the State Planning Committee of KazSSR. In 1992 she was appointed deputy director of the institute. Then she worked as the head of the department of financial and credit policy, first deputy minister of economy. More